Have sound bag, will travel

Who is The Documentary Sound Guy?

I am a location sound recordist in Vancouver, B.C., Canada.  I specialize in sound for documentaries.

I’ve been recording sound professionally since 2006.  I’ve worked on everything from giant Hollywood blockbusters to your brother’s neighbour’s short student film, and my favourite is documentary.  There is nothing else I’d rather do.

I’ve hiked half a day to a pristine alpine meadow for a shoot.  I’ve stood waist deep in the ocean waves to record dialogue in a kayak.  I’ve plugged in to helicopter comms at an active heli-logging operation.  I’ve recorded a daredevil waterskiier as he skied on and off the shore of the Squamish river.  I love documentary because it takes me places that normal people don’t go.

If your project is about doing something that other people don’t do, I want to be part of it.  If it’s history in the making, I want to be there.  Or, if it’s the story of an ordinary person sharing what they do for the first time because nobody ever asked them before, I want to be in the room with a microphone.

If you have a documentary, I can help it get made. 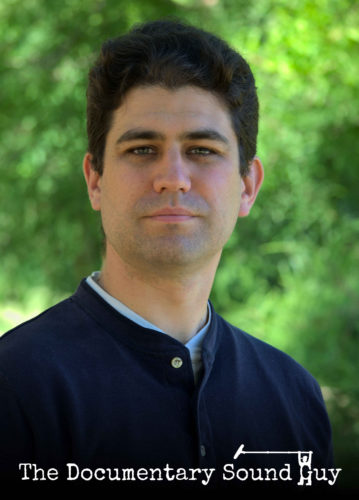 Documentary isn’t like Hollywood.  There are no rehearsals, the shots are made up on the fly, and the entire production can change in a heartbeat.

I thrive in this environment.

It’s little things, like knowing what the shot is by watching the lens, or anticipating that a subject will stand up a split second before it happens.

I didn’t get into film school.  But film school didn’t teach sound.  So, when their film students needed a sound guy, that was me.

Two years and dozens of student films later, I had a career in sound.  That was 2006.

Since then, I’ve done hundreds of productions in Vancouver’s highly competitive film industry.

True, but cliché.  Using tools effectively means using tools that are right for the job.

For me, that means choosing the tools that are best for documentaries:  Tools that are small, lightweight, durable in the cold and the rain, and which last a full day on one set of batteries.

Documentaries don’t just happen in the city where you live.  They happen “out there”, away from the conveniences of modern life.

I’m an adventurer; I love heading out into the wild.  And my kit is built for it:  It’s weatherproof, I can carry everything I need in one load, and I have spares of everything.

In a doc crew, wearing multiple hats is inevitable.  Sound is my main skill, but not my only one.

Need a stand-in?  I got that.  Someone to pinch-hit for B-Cam?  I have camera experience.  Want to find a gorgeous city skyline?  I grew up here.

Need someone to ride a bike towing camera on a skateboard, while operating the Ronin gimbal AND record sound at the same time?  I’ve done that.

You’ve found the perfect sound guy.  He’s skilled, has the right equipment, loves your project, and his price is reasonable.  And he’s unavailable for the next four months because he’s booming a TV series.

My schedule is built for documentaries that shoot sporadically over months.  Because I specialize, I’m more likely to be able to cover all your shooting days, and I’m often available on short notice.